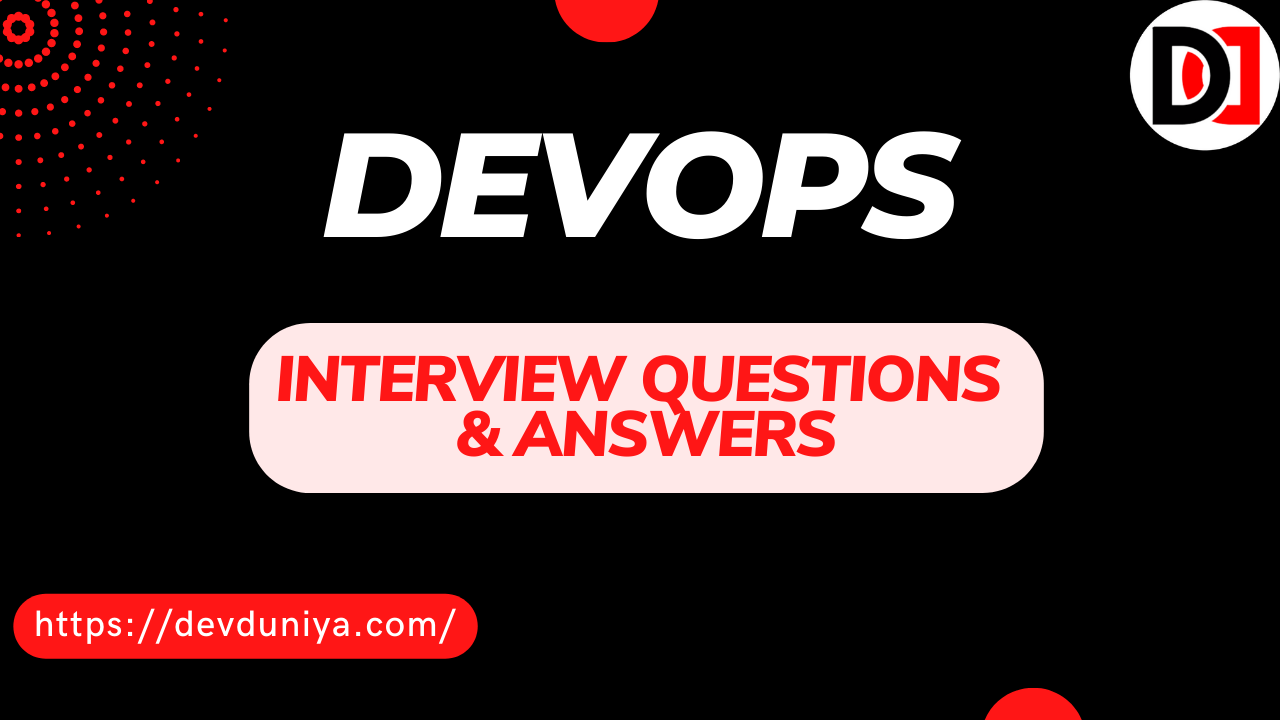 DevOps is a set of practices that aims to shorten the time it takes to develop and deliver software by improving communication and collaboration between developers and operations staff. It aims to automate the build, test, and release process, allowing organizations to release new features and updates more quickly and reliably.
As a DevOps engineer, it’s important to not only have a strong understanding of the technical aspects of the job but also to be able to effectively communicate your knowledge and experience. One way to do this is by being prepared for common DevOps interview questions.

In this blog post, we’ll go over some of the most frequently asked DevOps interview questions and provide sample answers to help you succeed in your next DevOps job interview. Whether you’re a seasoned DevOps professional or just starting out in the field, these questions and answers will provide a helpful guide for highlighting your skills and expertise.

Answer: DevOps is a set of practices that combines software development and IT operations to shorten the systems development life cycle and provide continuous delivery with high software quality. It aims to improve collaboration and communication between development and operations teams and to automate the build, test, and deployment process.

Q2. What are the benefits of using DevOps?

Answer: Some benefits of using DevOps include:

Q3. What are some tools commonly used in DevOps?

Answer: Some tools commonly used in DevOps include:

Q4. What is continuous integration?

Answer: Continuous integration (CI) is a software development practice where developers regularly merge their code changes into a central repository. Each merge is then automatically built and tested to ensure that the changes do not break the build. This helps to catch problems early in the development process and enables rapid delivery of new software releases.

Q5. What is continuous delivery?

Answer: Continuous delivery (CD) is a software development practice where code changes are automatically built, tested, and deployed to production. This allows for rapid delivery of new features to customers and reduces the risk of deployment errors.

Q6. What is a deployment pipeline?

Q7. What is infrastructure as code (IaC)?

Answer: Infrastructure as code (IaC) is the practice of managing infrastructure (e.g., servers, networks, etc.) in a declarative way using configuration files rather than manual configuration. This allows infrastructure to be treated as just another type of code and enables it to be version controlled, tested, and automated in the same way as application code.

Q8. What is a configuration management tool?

Q9. What is continuous testing?

Answer: Continuous testing is the practice of testing software changes automatically as part of the development process. This helps to catch issues early in the development cycle and ensures that code changes are of high quality.

Answer: A rollback is a process of reverting a system to a previously known good state in the event of a failure or problem. Rollbacks are often used in deployment processes to ensure that systems can be quickly restored in the event of an issue.

Q11. What is a canary deployment?

Q12. How would you describe the difference between continuous integration, delivery, and deployment?

Q13. What are some common tools used for continuous integration and delivery?

Answer: Some common tools used for CI/CD include:

Q14. How do you handle conflicts in a Git repository?

Answer: When there are conflicting changes in a Git repository, you can use the git merge command to merge the changes. If the changes cannot be automatically merged, you will need to resolve the conflicts manually by editing the files with conflicts and marking them as resolved with the git add command.

Q15. How do you monitor the performance of a system?

Answer: There are many tools and techniques you can use to monitor the performance of a system. Some common options include:

Q17. What is an immutable infrastructure, and how does it improve the deployment process?

Answer: An immutable infrastructure is an approach to building and managing infrastructure where resources are replaced rather than modified. This means that when a change is made to a resource (e.g., a server), a new resource is created with the desired changes and the old resource is discarded. This improves the deployment process by making it easier to test and roll back changes, as well as reducing the risk of configuration drift.

Q18. What is a blue/green deployment, and how does it work?

Q19. What is a rolling deployment, and how does it differ from a blue/green deployment?

Q20. How do you handle security in a continuous delivery pipeline?

Answer: One approach to handling security in a continuous delivery pipeline is to implement security gates at various stages of the pipeline. For example, static code analysis tools can be run as part of the build process to identify potential vulnerabilities, and automated penetration testing can be performed on staging environments before code is deployed to production.

Q21. How do you monitor the performance of a distributed system?

Answer: There are several approaches to monitoring the performance of a distributed system. One approach is to use a tool that collects metrics from all nodes in the system and displays them in a central dashboard, such as Prometheus. Another approach is to use distributed tracing to identify bottlenecks and latency issues.

Q22. How do you handle rollbacks in a microservice architecture?

Answer: In a microservice architecture, it is important to design each service to be independently deployable and scalable. This means that each service should have its own database and should not depend on the state of other services. To handle rollbacks, you can use a technique called “blue-green deployment,” where you deploy a new version of the service alongside the old version, and then switch traffic to the new version once it is up and running. This way, if there is a problem with the new version, you can simply switch traffic back to the old version.

Q23. How do you implement zero-downtime deployments?

Q24. How do you implement an automated testing strategy?

Answer: An automated testing strategy should include a mix of unit tests, integration tests, and end-to-end tests. Unit tests are small, isolated tests that validate a single unit of code. Integration tests ensure that different components of the system work together correctly. End-to-end tests simulate real-world scenarios and validate the entire system from end to end.

Q25. How do you implement a continuous integration (CI) process?

Answer: A continuous integration process involves automatically building, testing, and deploying code changes. To implement a CI process, you should set up a version control system to track code changes, and then configure a build server to pull the latest code from version control and run the build and test processes. You can then set up automated deployment tools to push the code to different environments, such as staging and production.

Q26. How do you implement a containerization strategy?

Answer: To implement a containerization strategy, you can use a tool such as Docker to package your application and its dependencies into a container. You can then use a container orchestration tool such as Kubernetes to deploy and manage your containers in a cluster.

Q27. How do you implement a configuration management strategy?

Q28. How do you implement a disaster recovery plan?

Answer: A disaster recovery plan outlines the steps to be taken to restore systems and data in the event of a disaster, such as a natural disaster, cyber attack, or hardware failure. To implement a disaster recovery plan, you can use techniques such as backup and restore replication, and failover. For example, you can use tools to regularly back up your data and store the backups in a secure offsite location. You can also use replication to create copies of your data and systems, and then configure your systems to failover to the replicas in the event of a disaster.

Q29. How do you implement continuous delivery?

Q30. How do you measure the success of a DevOps transformation?

Answer: There are several metrics that can be used to measure the success of a DevOps transformation. These include: